I wrote recently about the important distinction that Collins made between Crime stories and Mystery stories – important to them, that is.   It had its origins in the exclusivity of the Collins Crime Club series, so when Collins launched a new series of Crime Club paperbacks in March 1936 – the series that eventually became the White Circle paperbacks – it was natural that to start with, it excluded ‘mystery’ stories.

But once a parallel series of western paperbacks was added a few months later in a similar format and also with a large white circle as the title panel on the front cover, it was perhaps inevitable that mystery stories would follow.  The  westerns started in August 1936 with numbering from 101, leaving the first 100 numbers for crime titles, and mystery stories launched in January 1937, starting from number 201.

Where the Crime Club titles had featured two mysterious figures in green and black, and the westerns were in yellow with a cowboy on a rearing horse, the mystery titles used purple and a policeman blowing a whistle as their design motif.

The back cover of the first six titles explained what the mystery classification meant: ‘While the Crime Club issues books based on a definite detective process, Collins’ famous series of Mystery Novels sponsor equally exciting books of a different kind – mainly Secret Service stories and thrillers of the type for which Edgar Wallace was famous.  The Mystery Novels now published in this new pocket format have been selected from the most successful in this series.’

I still struggle to understand why, to take one example – ‘Unnatural death’ by Dorothy L. Sayers (published as one of those first six mystery titles), is not a Crime novel, or not considered as being ‘based on a definite detective process’, but it matters little.  By the time the next batch of 6 mystery novels, numbered 207 to 212, appeared in September / October 1937, the White Circle name had been adopted for the overall series, with crime stories, westerns, mysteries and romances identified as sub-series, each with their own identity, but clearly part of a larger whole.  The series continued with this structure for the next 20 years.

The pattern of issuing books in batches of six at a time gradually broke down, but new books continued to be added at a steady rate throughout 1938 and 1939, so that over 40 mystery titles had been published by the time war broke out in September 1939.  That inevitably slowed things down a bit and by 1943, with the constraints of paper rationing, the overall series more or less ground to a halt.  It effectively continued in a different form through the Collins series of Services Editions, but that’s another story.

Wartime restrictions also killed off the dustwrappers that had been used on the early volumes up to the end of 1939 – the first 45 volumes in the mystery series.

The main authors in those early years included J.M. Walsh / Stephen Maddock, David Hume, Arthur Mills, Sydney Horler and Edgar Wallace.   Peter Cheyney, who came to dominate the list later on, made his first appearance in 1939 and gradually rose in prominence through the 1940s.  So far as I can tell, none of the authors other than Dorothy L. Sayers are much read or much collected today, and again with the exception of Sayers, none of the individual titles have become anything resembling classics of the genre. 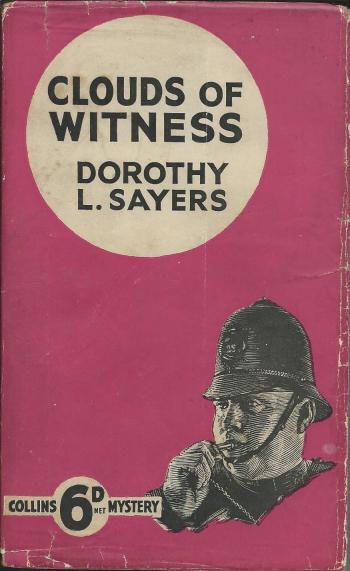 One that has become a classic.  White Circle number 219.

By 1943, just over 80 mystery titles had been published, numbered from 201 to 282, and a handful of further titles after the war took the numbering up to 300 by 1950.   Numbers from 301 onwards had earlier been allocated to an odd mix of Galsworthy’s Forsyte Saga novels  and romantic fiction, but a precedent for dealing with this had already been set by the crime sub-series.   Numbers 98 and 99 had been followed by 100c, 101c etc,, so that 101c (crime) could be distinguished from 101 (western).  On this basis, the mystery titles should have gone from 299 or 300 on to 301m, 302m etc.  They did eventually adopt this format, but only from 308m, so that the numbers from 301 to 307 are used twice.   There’s a more detailed look at some of the numbering peculiarities of the White Circle series on this link.

The post-war revival of the series didn’t really get going again until about 1950, but from then on around 10 mystery titles were added each year, reaching number 350m by 1955 and continuing up to a final 397m in 1959.  However not all were entirely new, as several titles were re-issued under a new number.   Throughout the final decade of the series, the list was dominated by two authors – Peter Cheyney and Edwy Searles Brooks, who wrote under the pseudonyms of Berkeley Gray and Victor Gunn.   Cheyney was the undoubted star, and many of his books featured a special front cover with his image replacing the usual policeman.  But Brooks was prolific too and between them these two authors accounted for around 60 of the approximately 100 titles published between 1950 and 1959.

The final book in the Mystery sub-series was ‘The lady is poison’ by Berkeley Gray, number 397m, published in August 1959 shortly before the end of the overall White Circle series.   Over a period of almost 25 years it had included almost 200 ‘mystery’ books and certainly made its mark as a leader in this area.