A dedication from the publisher – Tauchnitz volume 500

The 500th volume in any series of books is an achievement well worth celebrating, and Bernhard Tauchnitz was justifiably proud when he reached that milestone in 1860.  ‘It is with feelings of high satisfaction and most sincere gratitude, that I beg leave to offer to the Public the five hundredth volume of my Collection of British Authors’, he wrote in the preface.  ‘And why should I not be proud, when looking upon the splendid series formed by these five hundred volumes …’.

It was certainly a considerable achievement over a period of 18 years since the first volume appeared in 1842.   He was not to know at that point that the series would go on to more than 5000 volumes, a milestone reached in 1931 with considerably less fanfare.  Even within his own lifetime, it reached over 3000 volumes, so there were plenty of other occasions to celebrate. 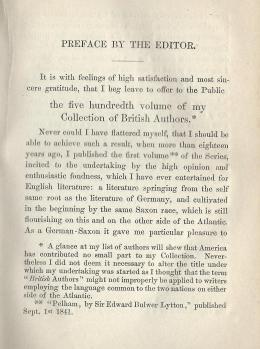 The 500th volume was a specially commissioned edition of extracts from key texts in English over 5 centuries, from Wycliffe’s translation of St. John’s gospel and Chaucer’s Canterbury Tales, through to the poems of Thomas Gray.   It was quite untypical of the series, which had built its reputation on copyright editions of contemporary novels, but Tauchnitz had an eye on history in preparing and presenting it and the implicit comparison of 500 volumes with 500 years of English history was too tempting to resist.

The print run was probably much longer than for the normal volumes and copies of the book are not now difficult to find.  As all the extracts contained in it were out of copyright, sales did not have to be restricted to the continent, and an edition for sale in the UK was also prepared by Sampson Low.

Rather more unusual though are presentation copies, signed by the publisher with individual dedications to authors or other friends and contacts of the firm.  The Bodleian Library in Oxford holds a copy with a dedication to the author Charlotte Yonge and a similar copy with a dedication to Disraeli is held at his former home, Hughenden Manor, now owned by the National Trust.  These copies differ from the standard copies, not only in being specially bound in full leather, but also in containing a frontispiece portrait of Tauchnitz himself. 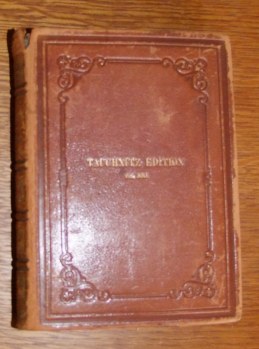 My own Tauchnitz collection now includes a similar copy with a dedication to Johann Jacob Weber, a fellow publisher in Leipzig and founder of the firm J J Weber.  It is in less than perfect condition, but still has an air of history about it.  The book seems to have been passed down through Weber’s family as it has a Jugendstil bookplate, presumably dating from around 1900 and identifying as the owner, his son Dr. Felix Weber, who followed him as head of the firm. 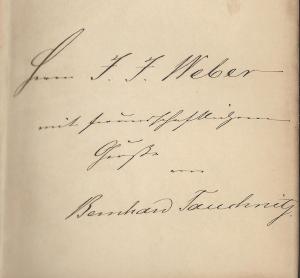 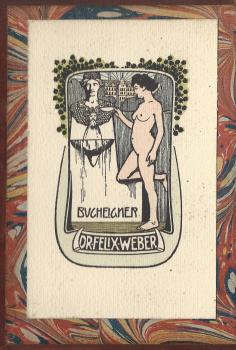 There is one slightly false note struck by the book, which refers on the title page to a ‘preface by the editor’.   The preface is signed by Bernhard Tauchnitz, which seems to identify him as editor of the book, and there are no other names referred to that might contradict this.  A later memorial volume is more explicit that the editor of this 500th volume was Dr Carl Vogel.  I suppose it might be argued that Bernhard Tauchnitz was in some sense the editor of the series, but this hardly meets modern standards of full disclosure.