As India celebrates the 70th anniversary of its independence, here’s a short look back at one little known aspect of those last pre-independence days – its Wild West paperbacks.  I’ve written before about the Collins paperbacks published in India during the war and in the years immediately afterwards.  They’re now generally very difficult to find, although I’m not sure there’s anybody other than myself searching for them.  But if most of them are difficult to find, the Wild West paperbacks seem to be almost impossible.

Judging by the lists of titles in the other books I have, Collins published over 40 westerns in paperback in India in the 1940s, most of them as White Circle paperbacks and a few in their general series.   There seem to have been a further 12 westerns in the series of Services Editions, printed specially for the British forces in India and SEAC, and at least three more published by Collins in what was then Ceylon, now Sri Lanka.  That’s over 50 different books, that would have been printed in large quantities – I’d have thought at least 10,000 copies of each book and possibly several times as many.  In total surely at least half a million books.  Yet in thirty years or so of searching, I had never seen a single copy of any of them.

There are reasons of course.  They were printed on poor quality paper and seen as disposable items.  Many would have been sold to British expatriates or British troops in India and would not have been thought worth transporting home.   The westerns may have survived less well than the crime stories and other novels, because they were more avidly read and passed around, or perhaps because they were seen as more disposable.  And even if copies have survived in India, they’re inevitably difficult to track down from Britain now.  Perhaps one day I’ll be able to search for them on the ground and find they’re not as rare as I think.

But this week I finally found one.   It’s in appalling condition, worn and dirty with the front cover missing and the spine disintegrating.  Even at £5, including postage, it was hardly a bargain.  But it’s the first Indian Wild West paperback from Collins that I have ever seen.  A small piece of history has been preserved. 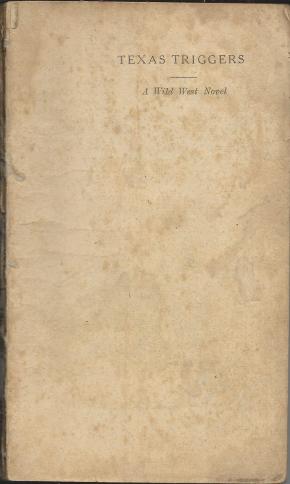 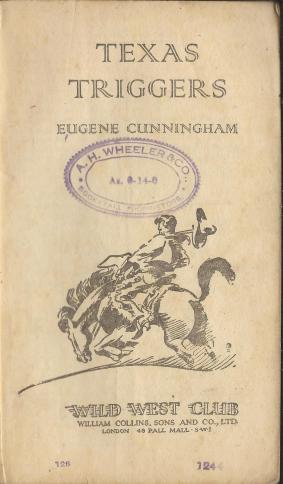 Not a pretty sight, but possibly unique

And it follows an earlier success, just over a year ago, in finding a western paperback from Ceylon, this one in much better condition.  So the search is not impossible after all.  There are westerns out there waiting to be found.  I’d love to hear of others. 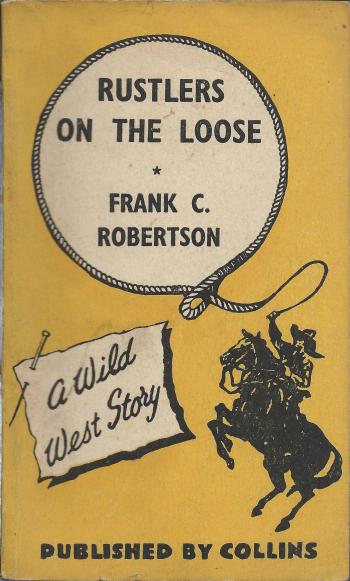 Shakespeare plays in Tauchnitz – the 1868 edition

I looked in an earlier post at the first 1843 edition of Shakespeare plays in the Tauchnitz Edition.   Although sold in large quantities over a period of 25 years, the publication was rather discredited by being based on the text of John Payne Collier, a noted Shakespeare scholar, but one who was later shown to be a forger.  Collier’s name was dropped from the title page in later printings, and the decision was eventually taken to re-issue all the plays in an alternative text edited by the Rev. Alexander Dyce. 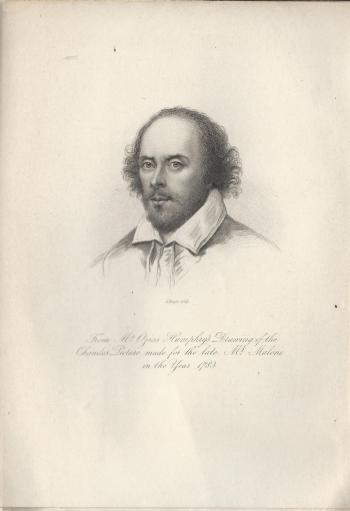 Frontispiece to the first volume of the 1868 Edition

In correspondence with Tauchnitz, Dyce was insistent that ‘no alterations are to be introduced, which are not authorised by, Dear Sir, your very truly, Alexander Dyce’.  Perhaps not surprising in the circumstances.  He also noted that ‘I should prefer my name to appear on the title-page of the proposed Shakespeare’.

Dyce had been a friend of Collier’s, but had turned against him, notably with his publication of ‘Strictures on Collier’s new Edition of Shakespeare’ in 1859.  His own edition of the plays had first been published in 1857, with a Second Edition in 1866 and this was to be the basis of the new Tauchnitz Edition of 1868.   In his preface to the Tauchnitz Edition Dyce refers to his First Edition having ‘too timidly adhered to sundry more than questionable readings of the early copies’, which may well be a reference to Collier’s influence. 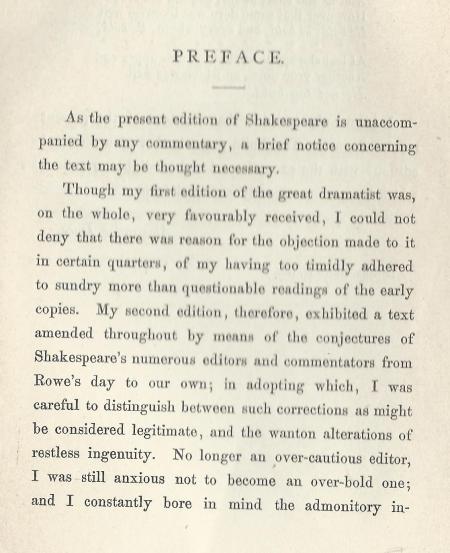 In the original paperback, the volumes initially said ‘Second Edition’ clearly on the front wrapper, which presumably meant the Second Tauchnitz Edition.  On the title page though they refer only to ‘the Rev. Alexander Dyce’s Second Edition’, which is a rather different thing.  Dyce also wanted to make clear that the dedication to John Forster was  the dedication of his second edition rather than just the Tauchnitz Edition, so had it dated 1866 rather than 1868, and inserted a note at the top saying ‘Dedication to the Second Edition’.  This serves only to confuse, as it could equally well refer to the second Tauchnitz Edition. 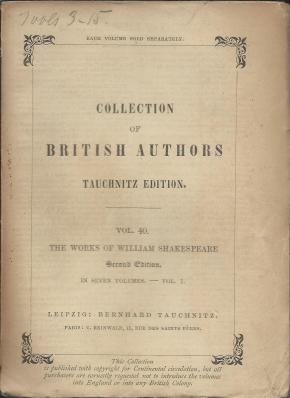 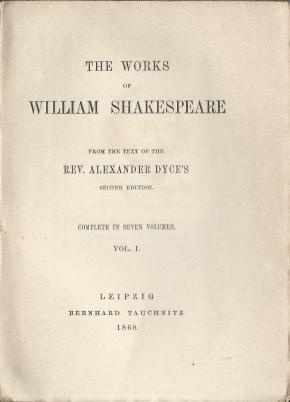 As with the 1843 edition, the books appeared not only as seven volumes in the main Tauchnitz series, at half a Thaler per volume, but also as individual plays, numbered from 1 to 37, selling for 1/10th of a Thaler each.  Unlike the 1843 edition though, there is no dual numbering of pages.   The individual plays all have their own page numbering, suggesting that they may have had their own stereotype plates.  It would presumably have been a relatively small task to change the page numbering after taking a first mould from the original page of type, and then take a second mould.  Each mould would be used to create a stereotype plate that would then be stored for use on reprints.

And there were many, many reprints.  Shakespeare plays were a steady seller for Tauchnitz for almost a century in total, and distinguishing the date of reprints is a puzzle of enormous complexity.  With bound copies it can be almost impossible, although a first clue is that earlier printings have the series number on the half-title in roman numerals, later printings in standard arabic numerals.

With paperbacks it’s a bit easier, and for the individual plays it is often the paperbacks that survive, as few of them were individually bound. They’re distinguished most easily by the price shown on the wrapper – 1/10 Thlr. for the first printing, then M. 0,30 from around 1871, modified to M 0,30 from 1892, increased to M 0,40 from 1916 and so on.  Full details in the Todd & Bowden bibliography.  In my experience the earliest paperbacks, showing the price as 1/10 of a Thaler are difficult to find now, but copies from the 1870s / 1880s are much more common. 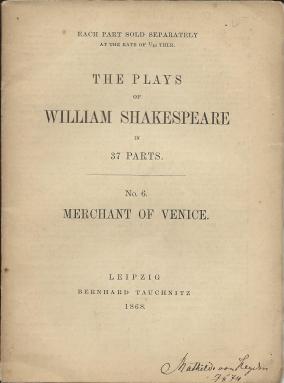 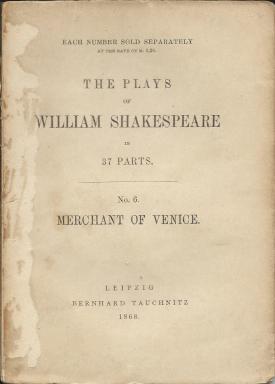 Around the time of the First World War, a new format for the individual plays was adopted, slightly smaller and more like the volumes of the Tauchnitz Pocket Library sold in wartime.   Variants of this format (still with Dyce’s name on the title page) continued to be sold right through until the Second World War put an effective end to Tauchnitz. 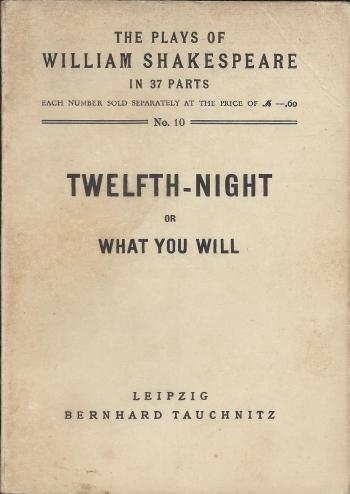 A reprint of one of the individual plays, from the 1930s

Rather sadly, Alexander Dyce never saw the longevity achieved by the edition that he gave his name to.  He died in May 1869, shortly after the first publication.  His displaced rival, John Payne Collier, surviving to 1883, could only watch and grit his teeth.