My mental image of Henry V, assembled more from references elsewhere than from actually seeing it, was of a stirring tale of English valour against the odds – a very patriotic, even nationalist play and certainly a very serious one.  ‘Once more unto the breach, dear friends’, and the St. Crispin’s Day speech are so much a part of our culture that they define the play if you’re not familiar with it.

So it was bit of a shock to discover that the play itself, at least in this production, is almost more a knockabout comedy than a tale of heroism, or a reflection on the nature of war.   Getting the balance right between the two seemed difficult to me, and I wasn’t sure that the RSC quite managed it.   If Bardolph, Nym and Pistol, brought over from Henry IV, were the only comic characters it would be fine, but we have another comedy set up with a Scotsman, Welshman and Irishman, a comic scene in the French court where the Princess is trying to learn English, another with one of the King’s soldiers (Williams) who ends up striking him, and even in the more serious scenes, the French Dauphin seems to be treated largely as a comic character. 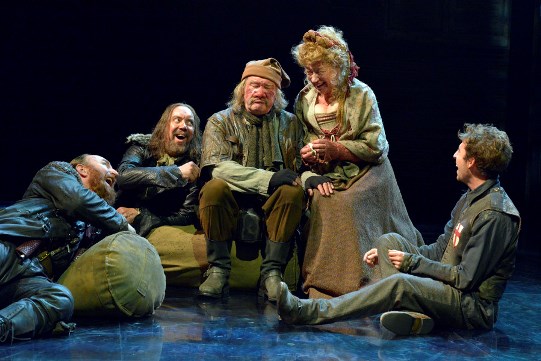 Falstaff’s old drinking companions are back

With all that going on, the transition from comedy to stirring speeches, or to the King’s introspection, seems crucial.   How do you deal with a comedy Scotsman, followed by an order from the King to kill the French prisoners?  Some of the comedy was brilliantly done – assuming it’s still OK in the 21st century to mock the Scots, the Welsh, the Irish and the French through stereotypes, in a manner that certainly wouldn’t be OK for some other nationalities.   Some of the serious stuff was brilliantly done too, and Alex Hassall carried off the title role well – entirely convincing in the transition from Prince Hal in Henry IV to the warrior king here.  He delivered the stirring speeches well, looked the part of a heroic leader, but still convinced in the more introspective speeches and in his bumbling courtship of the French princess.

I also enjoyed the staging, which made good use of the thrust stage, but seemed much simpler in terms of scenery or props than most RSC productions.  That made sense of Oliver Ford Davies’ role as the Chorus, powerfully urging us to use our imaginations.   Sometimes there are so many visual flourishes at the RSC that imagination is hardly required.

Oliver Ford Davies was impressive as the Chorus

But I wasn’t entirely sure that the transition from comedy to seriousness worked so well.  The English (or British?) army was presented as such a ragbag bunch of misfits that its conversion to a supreme fighting force capable of defeating an army several times its size, seemed little short of a miracle.   If it was King Henry’s oratory that did the trick, it wasn’t obvious here.  His passionately delivered ‘What’s he that wishes so?’ speech, seemed to be met with a sullen silence.   If Chris Robshaw’s inspirational words to his team were met with that kind of reaction, then it’s no wonder that England are out of the Rugby World Cup. 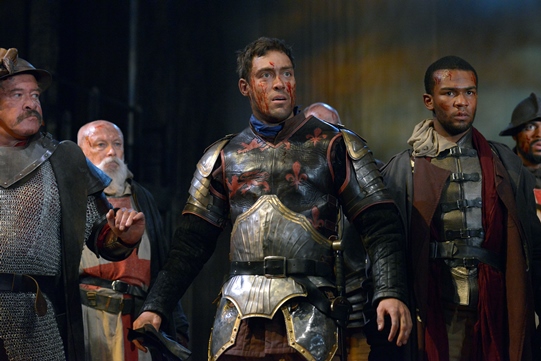