Charlotte Brontë can’t claim the distinction of being the first female novelist to be published by Tauchnitz – that went to Lady Blessington in 1843.  By 1848 when ‘Jane Eyre’ appeared as volume 145 and 146 of the Tauchnitz Edition, two other women had joined her, but the series was still dominated by male authors.  Within 20 years women writers would be in the majority, but in the 1840s they still had to fight against prejudice, not just in terms of getting published at all, but in terms of how novels by female authors were viewed.

So the novel appeared under the pseudonym ‘Currer Bell’, a writer of indeterminate gender, with the Brontë sisters unwilling to use obviously male names, but wanting to avoid being categorised as women writers.   Ironically, modern categorisation might say that the gender of the author is indeed important, that ‘Jane Eyre’ is evidently by a woman writer, and that it’s hard to believe many people were fooled.  In a sense though the novel hid under two pseudonyms, with its sub-title being ‘An autobiography’, so that the implied author was Jane Eyre herself and the book was only edited by Currer Bell.

It had been published in Britain in October 1847 to some critical acclaim but also controversy.   It was quickly reprinted, with the second edition carrying a preface from the author, dated December 21st 1847, defending it against charges of immorality and dedicating it to William Thackeray, author of ‘Vanity Fair’.   The Tauchnitz Edition was not far behind, announced at press on 4 February 1848, and including the preface to the second London edition.

Charlotte Brontë defended the novel vigorously in the preface.

Again sales must have been good, because by 1850 a Second Tauchnitz Edition appeared, completely reset and now also including a note to the third London Edition.   Very unusually for Tauchnitz, the Second Edition, and all later editions over the next 90 years or so, are dated 1850, rather than retaining the original 1848 date.   That does at least make it easy to recognise the first edition, which is dated 1848 and has 342 pages.

The success of ‘Jane Eyre’ is also reflected in the fact that the other novels by Charlotte Brontë were all published by Tauchnitz as soon as they could get their hands on them.  They appeared more or less simultaneously with the London editions – ‘Shirley’ in 1849 as volumes 180 and 181, ‘Villette’ in 1853 as volumes 256 and 257, and ‘The professor’ posthumously in 1857 as volume 404.   They were all published under the name of Currer Bell, despite the author’s identity having become widely known.

As well as Charlotte Brontë’s own books, Tauchnitz was eager to publish Elizabeth Gaskell’s biography of her, which again appeared in 1857 in the same month as the London Edition and possibly even in advance of it (volumes 384 and 385).   A Second Edition appeared in 1859 and for some odd reason this shares with ‘Jane Eyre’ the distinction of being clearly identified as a Second Edition and given a new date on the title page.  So again the first printing is much easier to identify than is usual for Tauchnitz Editions – it is dated 1857 and the two volumes have 314 and 298 pages. 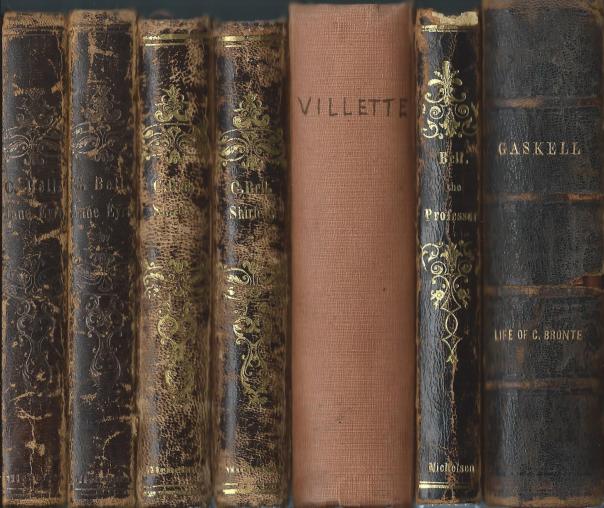