Partners in Crime – Collins and the Albatross Crime Club

Albatross had many significant achievements to its name in the years from 1932 to 1939. Its books were widely recognised as a design classic and in many respects became the model for Penguin Books, it achieved commercial success and an effective takeover of the old-established firm of Tauchnitz and it published for the first time in Europe many significant novels that went on to become classics. Even surviving, as a firm with a Jewish owner and Jewish managers, was an achievement in Nazi Germany.  But it had another ace up its sleeve as well – The Albatross Crime Club. 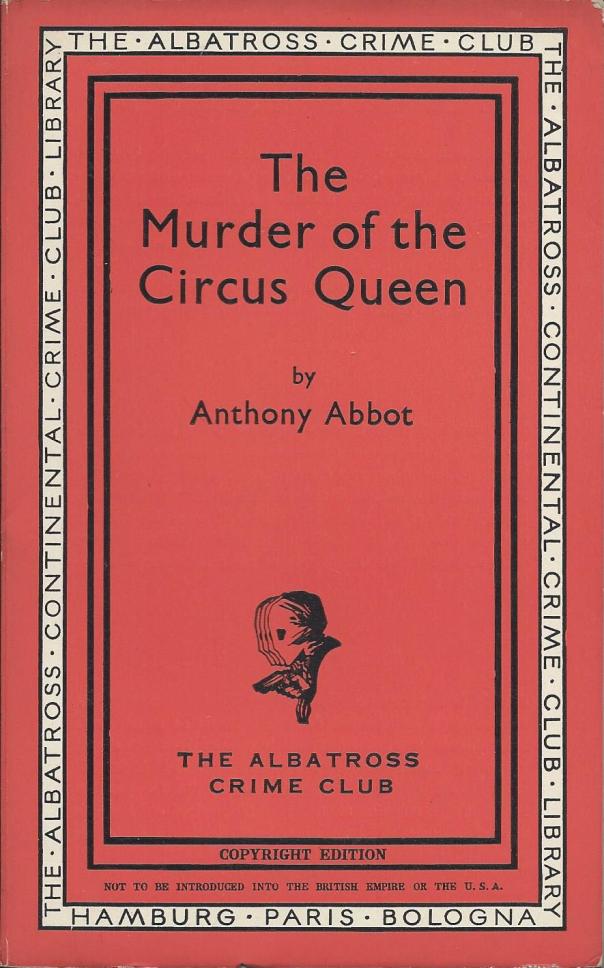 This was a direct offshoot of the Collins Crime Club in the UK, facilitated by the presence of Ian and William Collins on the Albatross Board of Directors.  Collins had become almost the godfather of the Golden Age of detective fiction with their series, launched in 1930.  The Collins Crime Club though was essentially a mailing list rather than a book club.   Members paid nothing to join and had no obligation to buy the books, which were sold through bookshops in the normal way.  But they received a quarterly newsletter and by 1934 the Club boasted 25,000 subscribers.   So an extension into continental Europe through Albatross must have seemed attractive to both parties.

The new series launched in 1933, so there was already a sizeable back catalogue of titles in the Collins Crime Club to choose from, but in practice the first batch of titles (from 101 to 114) were all ones that had been published in the UK within the previous year or so.  This went against the usual practice at that time, almost always enforced, that a continental paperback edition had to wait at least a year after first UK publication, to avoid eating into sales of the UK hardback.  Presumably the close relationship with Collins allowed them to override this.  So continental readers in 1933 had access to such recently published titles as ‘The ring of eyes’ by Hulbert Footner or ‘The motor rally mystery’ and ‘The Claverton mystery’ by John Rhode.   Pride of place though went to Philip MacDonald,who had three titles in the first batch, with ‘Death on my left’ (volume 101), ‘R.I.P.’ (vol. 109) and as Martin Porlock, ‘X v Rex’ (vol. 107).

Over the next 6 years through to the outbreak of war, Albatross published a total of 109 Crime Club titles, gradually bringing in most of the authors who had appeared in the Collins Crime Club.  There were 14 titles by Agatha Christie, although even she had to take second place to Cecil John Street, with a total of 17 under his two pseudonyms of John Rhode and Miles Burton.  Most of the books that appeared came relatively quickly after UK publication, and in most cases they are not only the First Continental Edition, but also the First Paperback Edition.   Collins didn’t start to sell paperback editions themselves until the launch of their White Circle series in 1936, and even then they usually left a longer gap after publication of the hardback.

As with Collins, the Albatross Crime Club was really just a marketing device and mailing list rather than a real club.   I have never seen any evidence of newsletters for club members, although I do have a copy of one flyer about new titles that might have been sent out to the mailing list.  I’d love to hear of, or see, any evidence of other marketing materials.

From 1937 the Crime Club was joined by the Albatross Mystery Club, again publishing books previously published by Collins, and a further 23 books were included in this series before war intervened.  There were also crime and mystery books not coming from Collins that were published in the main Albatross Modern Continental Library.  Both of those developments though are a story for another day.